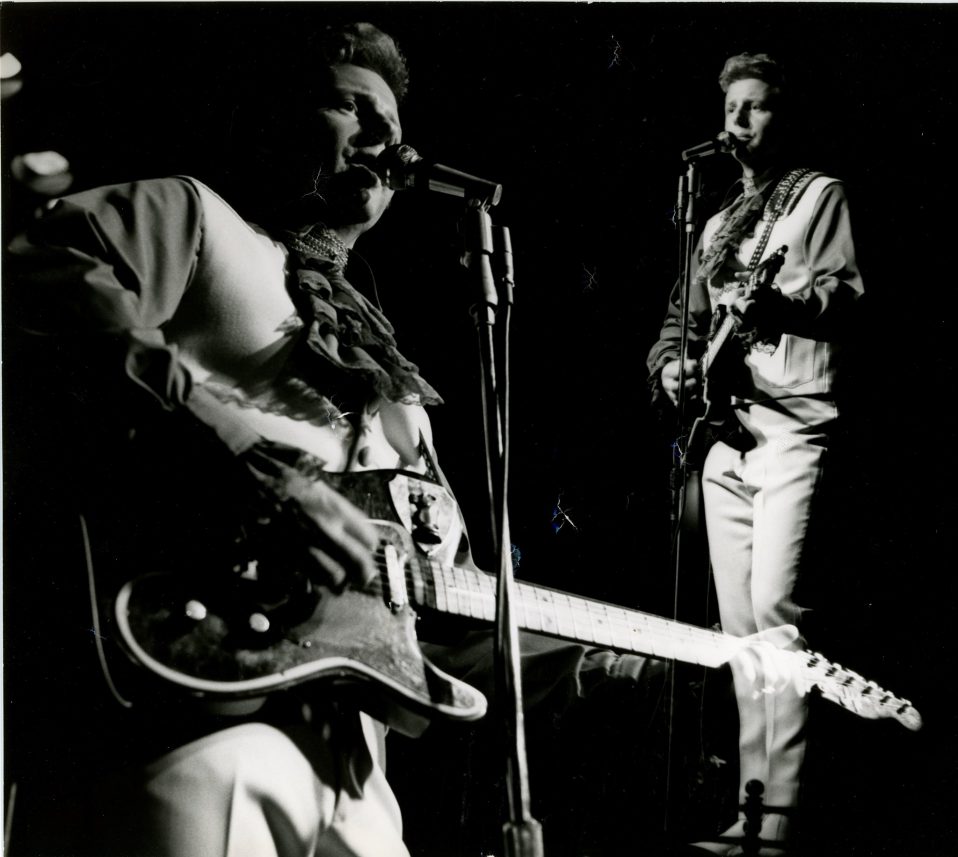 Radio host Johnny Western broadcast from 1986 to 2010 over Wichita country music radio station KFDI following a notable career as an entertainer and songwriter. Western is perhaps best known as the writer of “the Ballad of Paladin,” theme for the television series, Have Gun – Will Travel (1957-1963). This guitar was acquired by Western in 1960 when he was performing with the legendary Johnny Cash and chanced to meet Roy Nichols whose raising fame as a guitarist featured the use of Fender Telecasters. Western himself sought a Telecaster to better fit in with Johnny Cash’s sound and offered to buy the guitar from Nichols who countered with a willingness to swap for Western’s Gibson L-5. A deal was struck. The guitar then underwent customization typical with guitars used by celebrities on stage. It gained black paint, an enlarged pickguard, and the Paladin emblem ¬– the Knight chess piece taken from a bolo-tie discarded by Richard Boone, the star of the TV series. Boone complained that the tie bounced, hitting his face while he rode his horse.  Western recalled first seeing a Fender Telecaster in 1950 at the age of 15 when he traveled from his home in Northfield, Minnesota 60 miles to Rochester to see Roy Rogers. Rogers was backed by a trio featuring 24-year-old guitarist Jimmy Bryant who played “the funniest guitar I’d ever seen – a little flat board with no sound holes and all the tuners on one side.” It was a prototype Fender solid-body electric guitar that would become known as the “Telecaster.”

The Fender Electric Solid-body Spanish Guitar known as the “Telecaster” celebrates its 70th anniversary this year. A “TELECASTER” will be available to visitors to try – an instrument for the purpose of social distancing in the hands of most.

Thank you to E.M. Shorts Guitars for the loan of the Fender Deluxe Reverb amplifier and to Joe Stumpe, editor of the Active Age newspaper, for the loan of his personal Fender Telecaster guitar – for use in the day’s programs.

Regular admission applies – $5 adults, $2 for children 6-12; under 6 and members are free. Masks required in the building.

Your ticket for the: National Electric Guitar Day!